The problem is related to an out of date FileMaker Go App that doesn’t work with the new iOS. Go to the App store and look for a more recent version.

The ‘logbook9.fmp12’ logbook file will then need to be transferred to this new FMG app. If you have a recent backup this is easily emailed back to your iPhone as an attachment. You will then be given the option to open the file in the newer App.

Otherwise you can pull it from the old FMG App using third party backup software such as iMazing (https://imazing.com) which you should be able to download for a PC or Mac to link up with your iPhone.

If you have any lingering worries about data security and potentially identifiable information you may have recorded over the years within your logbook, now is a good time to do some spring-cleaning.

Most of the logbook fields are designed as safe, non-specific ‘pick-list’ options. The fields where you may have inadvertently entered personally identifiable information are: 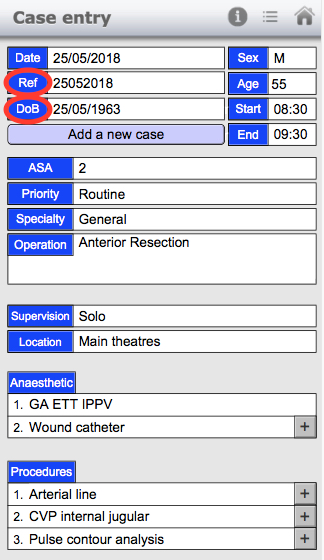 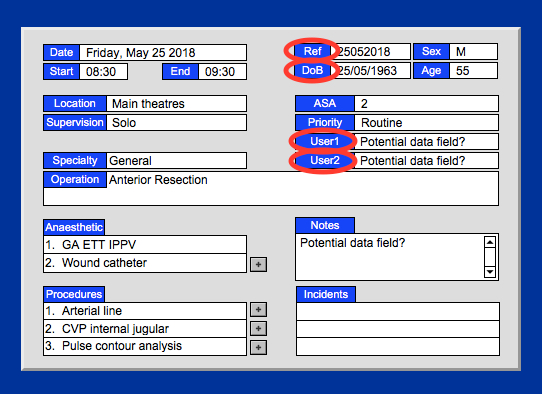 Change the list to suit your needs.
The ‘Operating Table’ can be found via:

Click on the ‘+’ icon at the bottom of the table to add a new entry.

Each new entry must have a ‘specialty‘ label (enter this carefully to ensure the operation appears under the correct list) and an ‘operation‘ which will then appear listed in alphabetical order.

Close the ‘Operating Table’ window when you have finished (on a laptop), or return to the main menu layout on iOS. 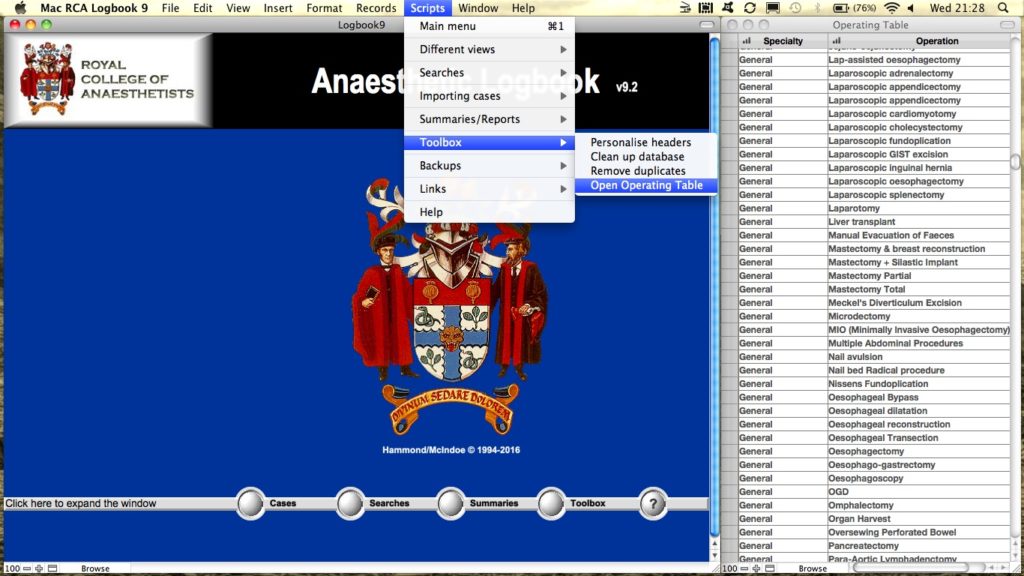 The self-contained Mac logbook/work diary runtime packages won’t work in Sierra/High Sierra, but FileMaker do permit download of a free time-limited but fully functional trial version of the Mac FileMaker Pro software that could be used, for instance, to try out printing all the reports for an upcoming appraisal?

The current (version 16) trial software can be downloaded from: http://www.filemaker.com/trial/

Install the trial, then open the ‘logbook9.fmp12’ (or WorkDiary.fmp12) file from within the FileMaker trial program.

Previous trial versions compatible with the logbook/work diary were also available via:

Unless you have to… don’t do it!
Instead move your up to date ‘logbook9.fmp12’ file from one device to another as an email attachment. It will open if you put it in the relevant logbook folder to replace the existing file on a PC/Mac, and it will open in FileMaker Go on an iOS device.

If your cases are coming from an older or different logbook version, you can import them on a Mac/PC from one of the standard automatic text file backups (look in the logbook ‘backups’ folder). The fields are automatically aligned if you use the top menu: ‘Scripts’ > ‘Importing Cases’ > ‘Update from a previous version’ routine.

If you have already started a second version 9 logbook, you can only merge logbook files and cases on a Mac/PC.

Get rid of old copies of logbooks on iOS devices, otherwise if you try to copy a new ‘logbook9.fmp12’ file to the device, iOS will automatically rename it ‘logbook9 1’ to prevent two files having the same name. This then causes confusion, especially with backups.

If you are trying to import cases from another source (e.g. Excel spreadsheet) the process is more complicated, and you will have to map the spreadsheet fields manually to the logbook fields during the import process.

These are the names and format of the 24 core data fields within the logbook:

If you can no longer open your logbook after an iOS update, your FileMaker Go version (not the logbook itself) is probably out of date.

The logbook datafile ‘logbook9.fmp12’ runs on all versions of FileMaker Go (12-16) but, iOS 11 has been designed to run only 64-bit apps and so Apple have effectively abandoned ship on older 32-bit versions of the app. FileMaker Go versions 15 (released March 2017) and 16 (released July 2017) are 64-bit, and so continue to work fine after the iOS 11 upgrade.

So… you’ve just upgraded your Mac’s operating system and the logbook will no longer work! The good news is that your data is still safe, but regrettably the decision to block FileMaker Pro runtime on OS X Sierra and High Sierra is down to Apple… ironic considering they make both products, but completely beyond anyone else’s control. I’m writing this post on a Mac, but sadly won’t be upgrading my OS X for that very reason. In terms of making a logbook that will work on all devices, the College is currently commissioning a server-based logbook from a commercial company called ‘Nomensa’, but it is likely to take them some time to complete it. FileMaker Pro has been a useful platform up until this move by Apple as it works on all versions of Windows from 95 through to 10, and all versions of OS from 9 through to El Capitan. We have used it since 1996 so it has stood the test of time reasonably well as a cross-platform engine. If Apple see the light and remove the block we will adapt it, but there isn’t any way round it at present.

Catherine McMillan has written an extensive logbook user guide that explains how to use the logbook effectively.